Home » Cyber Awareness » Cyber Law » Are Emails Admissible as Evidence in the Court of Law?

Are Emails Admissible as Evidence in the Court of Law? 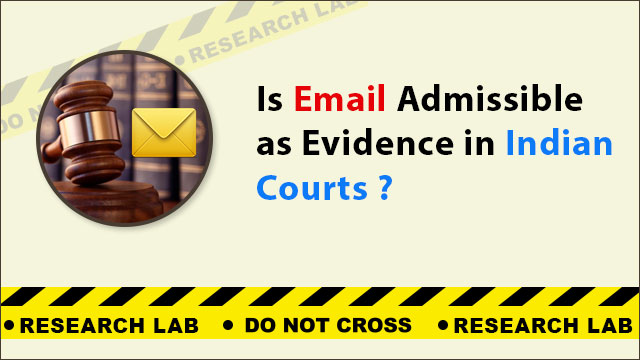 Is email admissible as evidence in Indian courts? A question asked by many lawmakers, police officials, and individuals willing to use their email conversation to strengthen their case. However, it is distressing to know that the email which could be a strong proof of “who said to whom” can easily be tampered with.

Times are changing! The way we communicated earlier isn’t the same as today. In the past, telegraphs, letters, and smoke signals were enough to convey our message to the person we wanted to communicate with.

However, in the wake of technological advancement, there are many modern ways of communication that make it efficient and easy.

Also, when it comes to formal communication, electronic mail or e-mail is one of the most popular mediums to transmit information.

However, it doesn’t take long for a blessing to turn into a curse. As cyberspace is expanding with a boom in digitization, its misuse is also rising at the same pace.

Given, how easy it is to tamper with the e-evidence, it puts a question mark on the authenticity of e-documents in the court of law.

So, the question arises is email admissible as evidence in India, and if yes, how to prove it is authentic too? Continue reading to find out the answers.

Are Emails Permissible as Evidence in the Indian Courts?

The answer to this is Yes. Since most of the formal interactions take place on emails, the Supreme court of India has made email admissible as evidence in the Indian Evidence Act, 1892.

Furthermore, the Supreme Court of India ruled that if a person wishes to present electronic evidence in court, he/she must first get an electronic certificate under Section 65B of the Evidence Act of 1892. Click here to get the certificate format and then fill and print it as a PDF to meet your needs.

It majorly deals with and mentions the conditions for admissibility of electronic evidence in the court.

It mentions proving the contents of electronic records in accordance with the provisions of Section 65B of the Evidence Act.

According to this section, any information contained in an electronic record is a document. Moreover, it is also admissible as evidence without further proof of the production of the original.

However, the only requirement to prove it in court is to satisfy the conditions set out in Section 65B(2) – (5) of the Evidence Act.

The latest judgement of the Supreme Court on the Indian Evidence Act, 1892 for secondary evidence was recently released. According to it, certification of authenticity from a qualified signatory must accompany only the Secondary Evidence.

Section 65B of the Evidence Act specifies both technical and non-technical requirements for the admissibility of electronic evidence.

Section 65B of the Evidence Act, Subsection (2), states the technological circumstances to use a duplicate copy (including a print-out) of an original electronic document.

How to Prove the Authenticity of the Email Evidence?

Through the Indian Laws, the Court approved the admissibility of emails into evidence. However, now it is up to to the person who wishes to employ an email record as evidence in the court to prove it is authentic too.

With the progress of technology, tampering with e-evidence has become child’s play. The individual may easily manipulate the email address, timestamp, and message wording.

So, how to establish that the emails presented in court are valid?

To do that, the services of the Cyber Expert of India – Anuraag Singh are a must. Through his cyber investigation services, he can test the validity of email evidence to the core. And thus prove the validity of evidence in court to support your case.

Need of a Computer Forensics Investigator

The reasons for employing cyber forensics experts are numerous. His multi-faceted skills not only help in proving the authenticity of emails but are useful in many different scenarios too.

Some of them are as follows:

Individuals who commit such crimes are experts in their fields. So, tackling them requires a person whose understanding of things considerably exceeds that of the criminals. Hence, Anuraag Singh possesses the required hyper-technical and razor-sharp approach to outperform the expertise of cybercriminals and thus prove the authenticity of your email evidence.