Does Evidence from Wayback Machine Admissible Evidence in Indian Court? 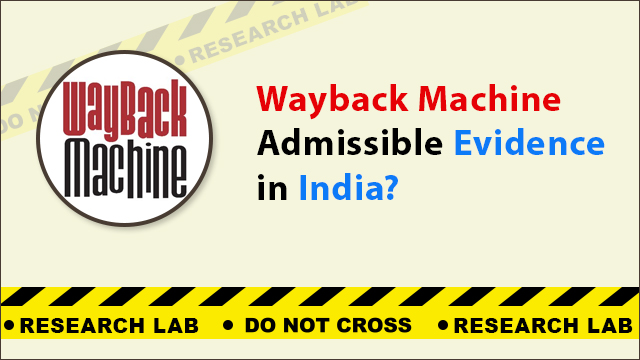 Many businesses are running online these days as it’s way more convenient than the traditional approach. And with the help of a website, the marketing of the products becomes much easier.

But, what if your business partner sues you for an event related to your business that occurred many years back? What if some of your web content goes missing while updating the website? Can you recover your content history online and use it as proof in court? Also, is there any way from where you can collect information, a place that acts as evidence in front of the court and thus prove yourself innocent?

Let’s find out the answers!

Firstly, you can go back in time to collect clues of the deleted web pages online by using a platform named Wayback Machine. Here, the Cyber Expert of India can help you in digging deeper into this online platform to provide you with the relevant evidence you need for your case.

Wayback Machine and its Uses

The Wayback Machine is a digital library of archived websites maintained over some time. It allows the users to time travel and see how the websites used to look.

However, it only captures the information, and cannot generate the website as a whole.

The Internet Archive was found by the Wayback Machine. By using this you can easily search for websites for a given date.

In addition to seeking a particular website, many lawyers use this platform for collecting electronic evidence for their cases.

But, the question arises is collecting the electronic evidence of any use? Will the evidence from Wayback Machine be admissible in the court of law?

Thus, understanding the laws regarding electronic evidence and whether the evidence is admissible in court or not could give us a clearer picture.

According to the Indian Evidence Act, under sections 65A and 65B, there is a provision where you can provide electronic evidence before the court. This electronic evidence could be in form of electronic records such as text, graphics, archived websites, or other information in digital form.

Based on section 65A, the electronic record must be confirmed as evidence in line with the needs of section 65B.

In Section 65B(1), any information confined in an electronic record (a computer output) is considered to be a document that is admissible as evidence in court without further proof. And section 65B(2) declares that the information should be categorized as ‘computer output’.

The archived websites in the Wayback Machine are nothing but a form of an electronic record. From the above Act, you can say that these act as electronic evidence.

However, in the context of a dependable source, can you rely on the Wayback Machine for evidence accumulation.

Is the Wayback Machine a Reliable Source for Collecting Evidence?

The answer is Yes, you can collect facts from here!

However, the lawyers who were backing the 1st party, accessed the Wayback Machine for the websites to find out the warning regarding product liabilities of the division that is sold. They found that the warnings related to product issues still remained on the website even after selling the division. That is, the product liabilities will be the sole concern of the buyer after the deal closes.

Hence, the lawyers gathered this resource from the Wayback Machine as a piece of evidence. Further, presented before the judges.

In contrast, in some cases, the contents in the archived websites are not completely genuine.

So let’s discuss this matter with some examples.

Are the Records from the Wayback Machine Authentic?

For instance, in the Dyno v Orica hearing. Dyno placed the printouts from the Wayback Machine of a website utilized on behalf of Orica. By those printouts, Dyno tried to prove his point at the priority date of the patent in dispute.

But, Orica opposed the admission of the evidence from the Wayback Machine. Orica claimed that those documents are hearsay documents and these materials did not fall under the business records.

Later on, His Honour agreed on the fact that the materials consisted of hearsay representation of the content of the website at a particular point in time.