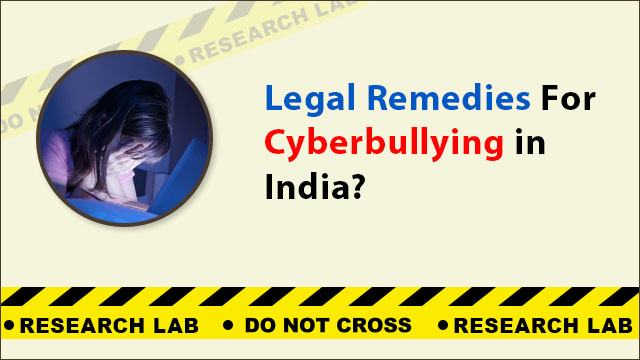 There was a time when bullying was limited to the schoolyards. However, in this online world, it is taking place in the form of Cyberbullying. Not only adults but younger children are also facing this online harassment. As cyberbullying is a faceless crime, the other person could be anyone, a stranger, a known, or, could be an impersonator. Through bullying, they can turn your life upside down. So, to fight this, are there any legal remedies for cyberbullying in India?

Let’s take the help of law to discover the answer.

But, the question is, why take legal action?

Well, some may ignore the seriousness of cyberbullying but, in reality, it has taken the lives of innocents.

According to the Cyber Expert of India, cyberbullying is one kind of cybercrime and is a punishable offence.

Let’s first, understand its definition.  So basically, when an individual or group of people utilizes digital technologies to intimidate you is referred to as Cyberbullying.

For instance, for now, the schools are conducting online zoom classes. And, some students are impersonating themselves as their friends and bullying other classmates thinking that they will remain anonymous.

Also, they are not aware of the fact that they could get in trouble for doing the same. As what they are unknowingly doing is considered Identity Theft.

In addition to that, there are numerous other examples of cyberbullying. Unfortunately, in some cases, online bullying led to suicides.

It was a real incident that happened in Kolkata. When a 17-year-old schoolgirl committed suicide after becoming the victim of cyberbullying. Later, it involved a police investigation.

As per the Times of India report, the girl accepted the friend request of a 23-year-old college student Faisal Khan. And they quickly became close friends. However, for some reason, the girl started avoiding Faisal. And he was not ready to accept the ignorance. So, to take revenge, Faisal along with his friends created a fake profile under the girl’s name and started putting inappropriate images. Also, they disclosed her phone number on the social media platform saying that she was open to relationships. When the girl received obscene calls, she realized that she was trapped. Sadly, she didn’t find any way to escape and killed herself.

All this could be avoided if the girl knew the legal remedies for cyberbullying through which she could have fought for herself.

Here an intriguing question arises. Are there any other forms of cyberbullying taking place online?

Let’s dig out the answer.

In a message group, they will target you by sending hateful messages, explicit photos. You will feel like you are somehow excluded from the social group. That may lead to depression.

Here, a sustained and continuous pattern is followed by the person who is trying to bully you. He will send you hurtful and threatening online messages with the sole purpose to harm your mental peace.

3. Disclosing Sensitive data to Offend You

The ill-intention is to reveal your sensitive or personal information without your consent on a public platform to embarrass you. The information could be your photo, document, private messages, etc. This method is also known as Doxing.

In trickery, the target is to gain your trust. Once you share your personal experience with the person, he will then share your secrets with a third party.

It is a shameful act of bullying to spread negative information about you either to ruin your reputation or relationship with other people. And, the person who is trying to do such kind of thing could be a friend or an acquaintance.

The person whose intention is to hurt will make use of your child’s social networking account. The motive is to post inappropriate content and will attach your child’s name.

When there is a direct or personal attack to provoke the victim for an online battle. Then understand that they are going to troll you on various social media platforms.

Cyberbullying is one such offence that leaves a traumatizing effect on the victim for a lifetime, they cannot get over it easily. However, the legal remedies for cyberbullying may help you heal your pain to some extent.

What are the Legal Remedies for Cyberbullying in India?

It might be hard to believe the fact that there is no specific law in India that could deal with cyberbullying. Nevertheless, there are redressals available under the sections of the IT Act, 2000 and the Indian Penal Code to handle cyberbullying.

This is Not the End!

If you are also a victim of Cyberbullying and didn’t know what to do next. Then, I hope this blog must have given you are a ray of hope. However, if you want to get consultation and advice on such sensitive matter before handling it legally, you contact the cyber expert, Anuraag Singh.