How to Investigate VBA Project Source Code for Malware? 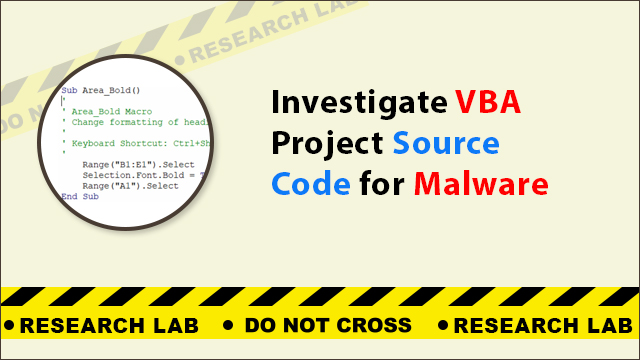 Note: In this blog post, we will discuss how to perform VBA Project Source Code Investigation.

With time, hackers are coming up with new techniques to tamper with electronic devices and documents. As a matter of fact, cyber-attacks relying on malicious Office docs, comprising VBA source code have drastically increased.

Further, we are regularly getting cases where the VBA project source code is involved to deploy ransomware and payload to infect user computers. Moreover, hackers make it more difficult to inspect such cases.

What could be the challenges faced by investigators?

Let’s have an in-depth discussion and find out the answer.

But, before getting into the core analysis, it’s important to understand why cybercriminals target VBA source code?

VBA, a programming code, is included as standard in almost all Microsoft Office applications. VBA codes usually run within a host application.

Mostly, it automates the task and lets users focus on other important aspects of their work.

As far as security is concerned, VBA macros can be created with malicious intent.

So, when you allow code to run within a program, you also leave the backdoor open and create a possibility that it can be used for injecting malicious code.

That is how hackers take advantage and sneak ransomware into the system.

Visual Basic code is flexible and easy to write. And, cybercriminals largely use VBA since they see the possibility of rapidly changing their code to implement new evasion techniques, especially targeting Office docs.

Thus, considering the security concerns, Microsoft made some changes through which one can execute code only if the user explicitly enables VBA macros.

However, these days, hackers are becoming more advanced. They can outsmart you and convince you to execute the code. Typically, they get into the VBA source code and cleverly infect your computer & sensitive documents through social engineering.

So, is there any way out to remove the passwords?

Well, here comes the role of software like the SysTools VBA Password Recovery Tool through which you can easily unlock and reset the VBA project password.

If we talk about some situations, at times, to make the investigation more difficult, hackers put mixed passwords. Also make it lengthy including numbers, alphabets, special characters, etc. And, the combinations could be anything.

But, luckily, with the help of the tool, it becomes possible to crack even multilingual VBA project passwords.

On the other hand, not just hackers, some employees also password-protect their .doc, .xls, .dot files, etc to secure the information crucial to the business. And, when they left the organization, it becomes an issue to open those important documents.

However, one can easily remove old passwords associated with a particular file and create a new one through the software.

Office documents are vital for the smooth running of business operations. So, hackers are now targeting these, especially the VBA source code. Moreover, they generate payloads and deploy ransomware to infect user computers. In some cases, they put a lock on the VBA project so that the code is inaccessible.

And, when an instigator tries to inspect the case related to the source code, it becomes a real challenge.

However, the issues can be easily resolv through the software. You can not only mitigate the issue but also effortlessly remove passwords to unlock the VBA project code.

Hence, start your investigation with the help of the right tool, now !