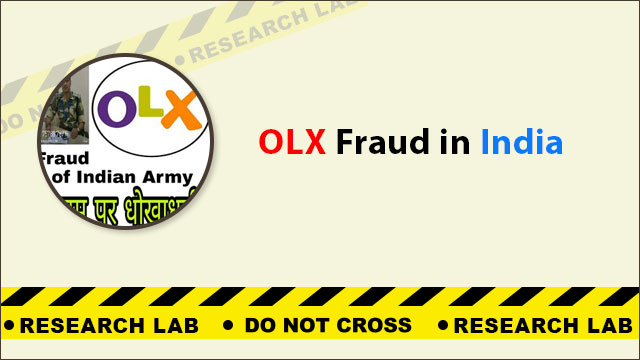 Scams involving OLX include fraudsters approaching unwary sellers and defrauding them of their money. If you are one of those victims, an cybercrime expert will explain what you can do. This article will discuss OLX fraud cases in India and how to avoid them.

In the age of the internet, we can do a great deal in a moment. While the internet provides further ease, it is also a dangerous place to be. Cybercrime is on the rise, and fraudsters are always devising new schemes to defraud people. This essay will examine an OLX fraud.

In such scams, the fraudster approaches the individual attempting to sell a product on websites or application like OLX, typically posing as an Army or Paramilitary person. He conducts a dialogue that appears legitimate to the victim. Once both partners agree on a price, the scammer claims to be stationed in an unreachable section of the nation and hence unable to take physical delivery or pay the money in cash.

Because he claims to be an Indian Army officer, people instantly trust him. The scammer then demands payment using online payment applications such as Paytm or Google Pay. Now, the scammer sends the seller a fake screenshot purporting to indicate that the seller’s Paytm account has been credited with the stated amount. However, the vendor discovers that they have not been compensated.

The fraudster then plays his final card of the play. He walks the victim through the procedure and provides a QR code that he claims may be used to retrieve the money. The victim goes for it and scans the QR code and inputs the UPI Pin in order to pay the money rather than get it.

The victim now panics little and requests a refund from the scammer. This is the section in which the fraudster has another opportunity to steal additional money from the victim’s pockets. He says that this was an error and that he is now sending a QR code for double the amount to pay for the money that was deducted from the victim’s account by mistake.

If the target falls for it a second time, the fraudster earns three times the money. These con artists continue this procedure as many times as possible without being apprehended.

As a result, the victim ends up losing hundreds, if not millions, of rupees while attempting to sell a goods on OLX.

How to avoid OLX Fraud?

Users must maintain their calm and serenity when conducting such transactions on e-commerce platforms. They should consider all factors before agreeing to any payment request. The fundamental point to remember is that all UPI applications require users to input their UPI PIN or M-PIN when making a payment, which varies depending on the associated bank account. This is not necessary for payment acceptance. Therefore, if the app prompts you to enter this PIN following the QR code scan, this should be the first red signal. Leave the code blank and cancel the transaction. The same is true for payment requests that have been sent. Additionally, they request the M-PIN from users before to deducting the funds.

Before approving any payment platform request, carefully study the message’s text. Generally, the text should draw the scammers’ attention. You are allowed to decline if you are not convinced.

To gain confidence and faith, fraudsters utilize fake identification documents from governmental agencies. Be suspicious of any such effort. Please be cautious of online vehicle sale frauds and other  scams.