Defamation in Cyber Space : All you Need to Know 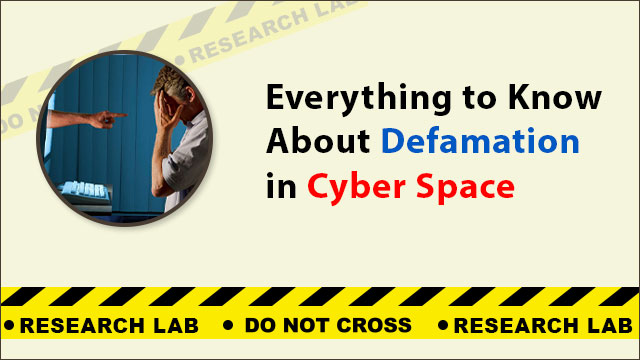 The world is changing drastically, the digital generation is now leading society. The essential part of the digital generation is the internet, without which each and every work seems impossible. Whether it is social networking, communicating, publishing, posting on social media, or exchanging information, nowadays everything is happening in cyberspace. As, you know, the trend to comment on posts on social media platforms (eg. Twitter, Facebook, etc) is significantly increasing. Hence leading to defamation in cyber space.

A question must have crossed your mind, what is cyber defamation?

Let’s get familiar with the term.

What is Cyber Defamation?

It means publicly releasing an invalid statement about an individual in cyber space that can badly affect the reputation of that individual.

In India, defamation can be scrutinized as a civil and criminal offence. For that, the Indian judiciary system provides legal assistance to the victims.

However, the public statements could be of any form like written or verbal. So, let’s discuss which category comes under which defamation.

Defamation is divided into two categories;

Now you know, the damage done to the reputation could be in any form either written, oral, through signs, or visual representations.

However, a student can not sue the teacher for calling him/her lazy. Or when an employer criticizes an employee for coming late, he/she can not file a petition against the employer for defamation.

Hence, you must understand the difference between opinion and defamation and when can you say that someone is defaming you.

Prior Conditions of Defamation

Minor harm to the feelings of an individual doesn’t contribute to the offence of defamation.

Let’s talk about some legal acts, IPC, and consequences for defamation.

Hence, you have to understand the legal terms for defamation as an offensive act.

For example, someone spread the false news that XYZ insurance company is fooling its customers by selling fraud insurance. Then it will come to the reputation of the organization hence the case of defamation.

But, if anyone has been defamed in cyberspace, then he/she can report cyber crime onlineor at a cybercrime investigation cell (unit of Crime Investigation Department).

On the other hand, there are issues in investigating defamation in cyber space.

If you talk about the main challenge then it is the digital space itself!

As the dependency on the internet is rising for the use of social networking so is rising the defamation cases in India. The issue is to riddle out the person who tried to hurt the reputation. This is because most of the people on the internet use fake names to hide their identities.

Hence, it may be hard to find out the person who published the defamation statement and maybe more challenging to figure out the readers who wrote the comments on that particular blog or site.

But, it is not impossible to uncover the identities of the persons behind defamation.

You must be wondering, how?

Well, this is possible with the help of a trained cyber professional, Anuraag Singh.

Now, let’s discuss how can he do the same!

With the Aid of a Cyber Expert, Track Down the Cyberspace Defamer

As you know, there are lots of fake Facebook and other social media accounts that are floating on the internet. And also culprits use many fake email Ids and numbers to carry out cyberbullying.

According to the Indian Penal Code (which comes under cyber law), cyberbullying and cyber defamation are punishable offences.

So, if you are a victim of the same then you should register a complaint against these distressing activities in a cybercrime investigation cell.

However, for that, you are going to need electronic evidence to prove your cyber defamation case in court.

You don’t have to worry about the same. Because there are cyber security services like Digital forensics available by which you can efficiently trace the defamer.

Anuraag Singh, in his 21 years of service, tracked down many digital footprints of culprits. There was the involvement of the criminals in cyber-related crimes, bullying, defaming, etc.

His remarkable experience in the field of Digital Forensics will certainly add an extra benefit while tracing those lawbreakers.

An exceptional approach to ‘get to the bottom of the issues’ earned him a prestigious reputation among many Law Enforcement Agencies.

Hence, if you are someone who is seeking trusted professional hands who can collect accurate pieces of digital evidence. Furthermore, to help you win the case against cyber defamation, then your search ends here!